The Spider and its Web 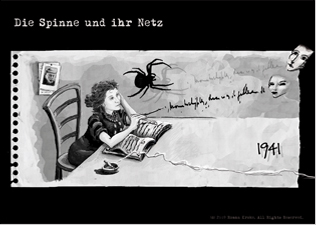 Customized title: language freely selectable – please specify the language of your choice during the order (in the preview: French)

Annotations to the illustration by Roman Kroke:

I created the illustration on the basis of the following citations from Etty’s diary:

“I want to get to know this century of ours inside and out. I feel it every day anew. I run my fingertips along the contours of our age. (…) I make myself confront everything that crosses my path, which sometimes leaves me feeling battered. It is just as if I let myself crash violently into myself, leaving dents and scratches. (…) I also have the feeling that all the problems of our age and of mankind in general have to be battled out inside my little head.”

“I wish I could live for a long time so that one day I may know how to explain it, and if I am not granted that wish, well, then somebody else will perhaps do it, carry on from where my life has been cut short. And that is why I must try to live a good and faithful life to my last breath: so that those who come after me do not have to start all over again, need not face the same difficulties. Isn’t that doing something for future generations?”

“I shall try to convey to you how I feel (…). When a spider spins its web, does it not cast the main threads ahead of itself, and then follow along them from behind? The main path of my life stretches like a long journey before me and already reaches into another world. As if I (…) was now helping to build a new and different society.”

The selected excerpts are a particularly vivid indication of how Etty saw herself as a contemporary witness and a transmitter of awareness to future generations. She considers the problems of her time to be phenomena which might also be of significance in other national, cultural or religious contexts. This explains why Etty not only dwells upon Shoah-specific topics but also on universal issues. She uses an image to try to shed light on her reasons for writing a diary. She compares the work with that of a spider spinning its web. In general, a spider and its web have rather a negative connotation, being associated with something predatory, a threat, a trap or the danger of becoming ensnared. Through Etty’s use of metaphors, these pictures undergo a new, contrasting interpretation. The spider takes on the role of a creative being, the architect of a web of ideas. Etty hopes that the perceptions recorded in her diary will reach out into another world, a future world. With her diary, she wants to cast out a thread which future generations can pick up, so that her spiritual legacy might contribute to building a new and better society after her death. Etty’s comparison between herself and a spider, and between her diary and a spider’s web, has become my central visual metaphor. It winds through this series of illustrations and you can find it in several of the pictures (“Fear”; “Flowers”; “Travel Eastward”; “Thinking Heart”; “Future”).

The faces found in the top right-hand corner of the picture were inspired by original sketches Etty drew in her diary. The writing swinging from her pen into the future was also based on the contents of the original diary.

You may have noticed the letter “S.” on the right-hand page of her diary – a reference to the significant impact of the Jewish psychochirologist Julius Spier on Etty’s spiritual development. Spier was her mentor, friend and lover. The decision to start writing a diary was probably taken at his prompting. In her writings, Etty refers to him as “S.”.